The War Memorial Park was opened in July 1921 as a tribute to the 2,587 Coventrians who died between 1914 and 1918 fighting in the First World War.  The Park continues to be a place of remembrance with a memorial and formal gardens, but it has also been developed to support sporting and family activities and is enjoyed throughout the year by a large variety of people.

Christmas in the Park with Carols and a visit from Santa

Our annual Cristmas event at the Visitor Centre in the Park. 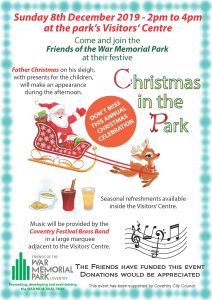 Come and join in the festive fun.  There will be a visit from Father Christmas and Cristmas Carol to music provided by the Coventry Festival Brass Band.  All welcome.